The Lower Otter Estuary meets the sea at Budleigh Salterton in East Devon. The estuary, along with the cliffs of Otterton Point, is a nationally important site for biodiversity and is designated as a Site of Special Scientific Interest (SSSI). It contains a range of intertidal habitats including saltmarsh and tidal creeks.

The current area of the SSSI is 33 hectares but the estuary itself was once much larger. Next to the estuary – and once part of it – is an extensive area of freshwater grazing marsh, while the mouth of the estuary is largely closed by a shingle bar which has changed little over hundreds of years.

The estuary and marshes support a wide variety of breeding and wintering bird species, including waders and wildfowl. They form part of a network of important feeding sites which include the Axe and Exe Estuaries.

A network of public footpaths provides access to much of the site, with one of Devon’s most popular footpaths running along the embankment. This was built in 1812 to convert estuarine habitat to farmland. Today, it is part of the South West Coast Path.

The estuary is managed by the Pebblebed Heaths Conservation Trust, a conservation charity established by Clinton Devon Estates in 2006 to look after the nature reserve and the adjacent East Devon Pebbled Heaths. Work includes managing reedbeds, improving wetland features on the grazing marshes, and understanding and controlling invasive species such as Himalayan balsam.

Manmade changes to the estuary

The natural environment of the River Otter and its estuary has, for hundreds of years, been modified by humans. In the early 19th century an embankment was built to claim land for agriculture. This enclosed about three-quarters of the original extent of the estuary, turning intertidal habitats from mudflat and saltmarsh into agricultural land. The river was also straightened and disconnected from its floodplain. Further alterations to the river and its floodplain took place with the construction of an aqueduct, a refuse tip, and the railway which arrived in 1897.

Changes and challenges to the estuary 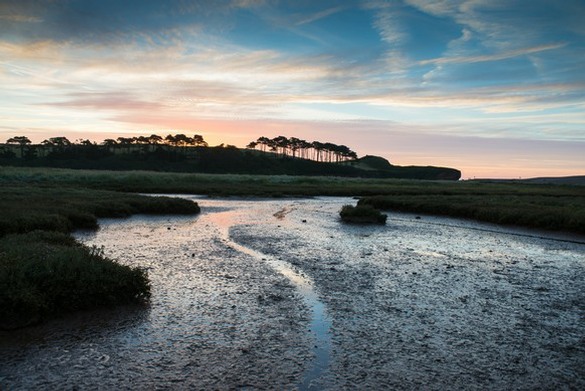 Current challenges faced by the estuary

The overall results of all these changes is a disruption of natural processes with the river no longer able to adapt and move naturally across the floodplain as it once did. Nor can it cope effectively with flooding events. The natural environment itself is also poorer, resulting in reduced biodiversity and lower-quality habitats, and there is a constant need for costly infrastructure maintenance.

Manmade changes to the river and estuary mean the flood flows after heavy rainfall cannot pass down the river channel to the estuary. Water spills into the remaining floodplain but then backs up until it can overtop the embankment across the floodplain. Prolonged deep flooding of fields, Budleigh Salterton Cricket Club and South Farm Road follows because the outfall of the only land drain lies below the high tide mark.

Climate change, with increasing storminess and changing weather patterns, means that these floods are becoming more frequent, while rising sea levels also mean that the embankments are more likely to be overtopped at high tide. Damage to infrastructure as a result of flooding is already on the increase. There is a significant risk that a future major flood or extreme tidal event could lead to catastrophic failure of embankments, with unpredictable impacts on the environment. Such an event would also compromise one of the most heavily used public footpaths in Devon, and a public highway to South Farm.

Erosion of embankments, river banks and footpaths, as well as clearance of drainage outfalls, place increasing financial demands on those responsible for them, including Devon County Council and East Devon District Council. Maintaining the status quo is becoming ever more difficult and there is a common desire for a more sustainable way forward.

There is a strong argument for a pre-emptive and planned approach to climate change, leading to managed realignment of the existing embankments. This could both secure long-term future public access and allow natural processes to re-assert themselves, leading to new benefits for people and wildlife.

Work to begin on new pitch for cricket club

May 25, 2021: Work is due to start on a new pitch for Budleigh Salterton Cricket Club off the B3178. Elsewhere, public footpaths are open and traffic management will be suspended.
Click here for details

The case for the Lower Otter Restoration Project

We’ve put together a briefing note for councillors and other stakeholders about the project, its background and what it hopes to achieve.
Click here to read

If you’d like to receive emails to let you know about important project updates, please click here.

Tell us what you think

To contact the Lower Otter Restoration Project, or to email a member of the project Stakeholder Group, click here.

Answers to the most frequently asked questions about the project are available here.